There is a treasure-trove of old family photographs taken on the river, which I didn’t know about before my parents died. They were taken in the period 1930-1950s and in many cases we don’t know who took them, with what camera, or even who many of the people are. It’s amazing that they survived at all. Prints and negatives deteriorate in damp and hot conditions. The intense blue quality of some of the pictures however is the result of the way they were copied more recently. The originals are in the familiar faded black and white.

The only person still alive who appears in these photographs today (2020) is Noel Arnold, my step-brother, pictured below as a boy of two/three.  Noel is now 89. The others are long laid to rest. My father took this picture (which is why he is not in it). I have been doing a lot of genealogical and historical research on the family and have recently met the grandsons of my Uncle Mervyn Drew Arnold who died in 1942. I did not know they existed and had never heard of them before. There is a complicated and very sad story about my uncle’s death, still partly to be unravelled. We need coroner’s reports to get any further. But that’s another story. My half-brother Noel put the names onto these photographs many years ago, based on what his mother, Amelda, told him. 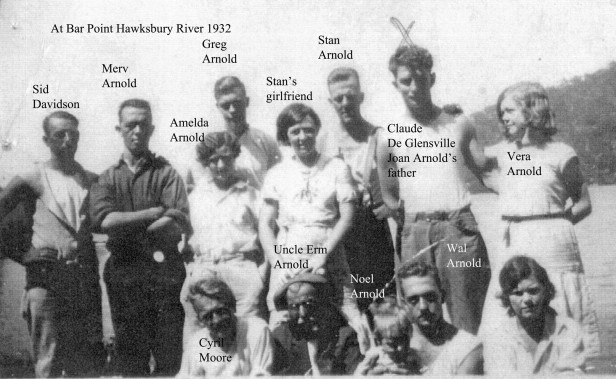 Below: In this picture of  a family gathering, possibly Uncle Cyril’s wedding day in 1933, my father is carrying his son Noel. His mother Augusta stands near him. My other step-brother John (who died tragically at the age of seventeen) is a baby in his mother’s arms. Other guests were unrecorded. Walter Arnold and Uncle Erm Arnold were my grandfather’s brothers. My grandfather Owen John died in 1932 before this photograph was taken. It was miraculous to obtain the family photographs above with the names of so many written in them. 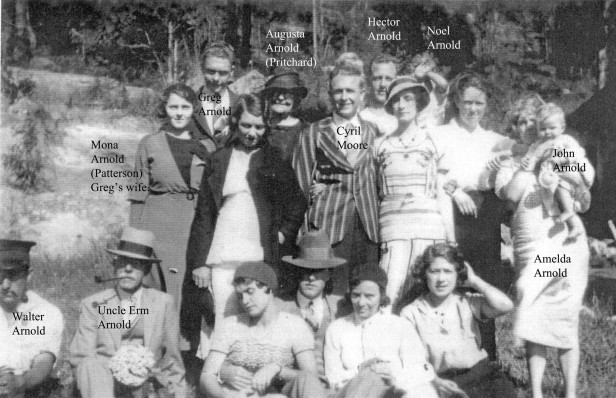 Photographs capture past time, we engage with lost places and moments. Among the thousands of photographs taken in the late nineteenth and early twentieth century, when photography first became possible for ordinary people, many of their subjects are and always will be unidentified. Archives around Australia are full of images taken in unknown places by unknown photographers. In the course of looking for images of the Hawkesbury River which could be used for a series of monochrome paintings, I came across these mysterious photos taken on the upper Hawkesbury at some unknown time. Who were these men? Who took the photos? The upper picture seems to have been taken in one of the many creeks along the river – from another boat. The lower one was probably taken from a high bank above the stream. I have tried to identify the sources, without any success. The wooden rowboats look almost exactly the same as the ones my family built. 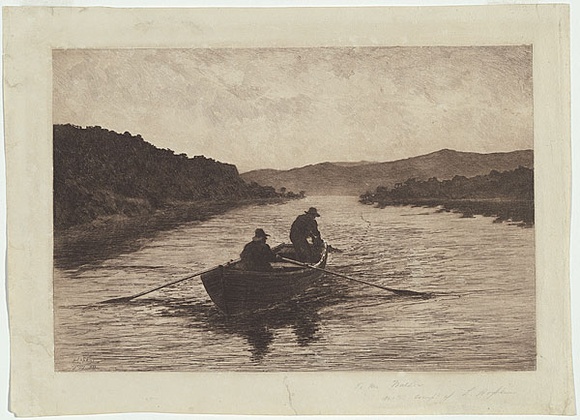 PUBLISHED BOOKS OF PHOTOGRAPHS: There are a number of histories and photographic records of the Hawkesbury River. Most of them are about the Upper Hawkesbury where many settlers occupied the land quite densely, growing crops, raising chickens and other animals. This is the area Kate Grenville’s book, and the subsequent movie, The Secret River, refers to. The Lower Hawkesbury is much less well recorded. However there is one excellent book of photographs: Axel and Roslyn Poignant’s collection of photographs taken on the Hawkesbury River Postman in 1950. Every one of these photographs reminds me of my early life when we lived on the river more or less full-time. In 1951 I was 6. I knew a few of the people in the photos, although I can’t recall most of their names. Our house appears in the far distance in just one of them.

The most amazing thing is how little the environment has changed. My grandfather, father and two uncles purchased the land in 1923 and they were  among the first whites  living on that part of the river. The area had been very densely populated by indigenous people who left their traces behind in oystershell middens many metres high. By the middle of the nineteenth century most seem to have succumbed to the horrors of the early frontier years, although some descendants still live nearby on Marra Marra Creek.

I am working on an experimental project, a book of bricolage where I will publish family photographs and notes,  short stories and prose extracts, some poems and drawings.

FLUVIAL: A HAWKESBURY LIFE will be a memorial volume, a mixture of celebration and nostalgia for a 100 year long family history, created with an awareness of how fragile our tenancy of this beautiful place is, as climate change eats away at the foreshore and families are pulled apart by the forces of unstoppable transformation.

Mangrove Creek 1951:  a Day with the Hawkesbury River Postman